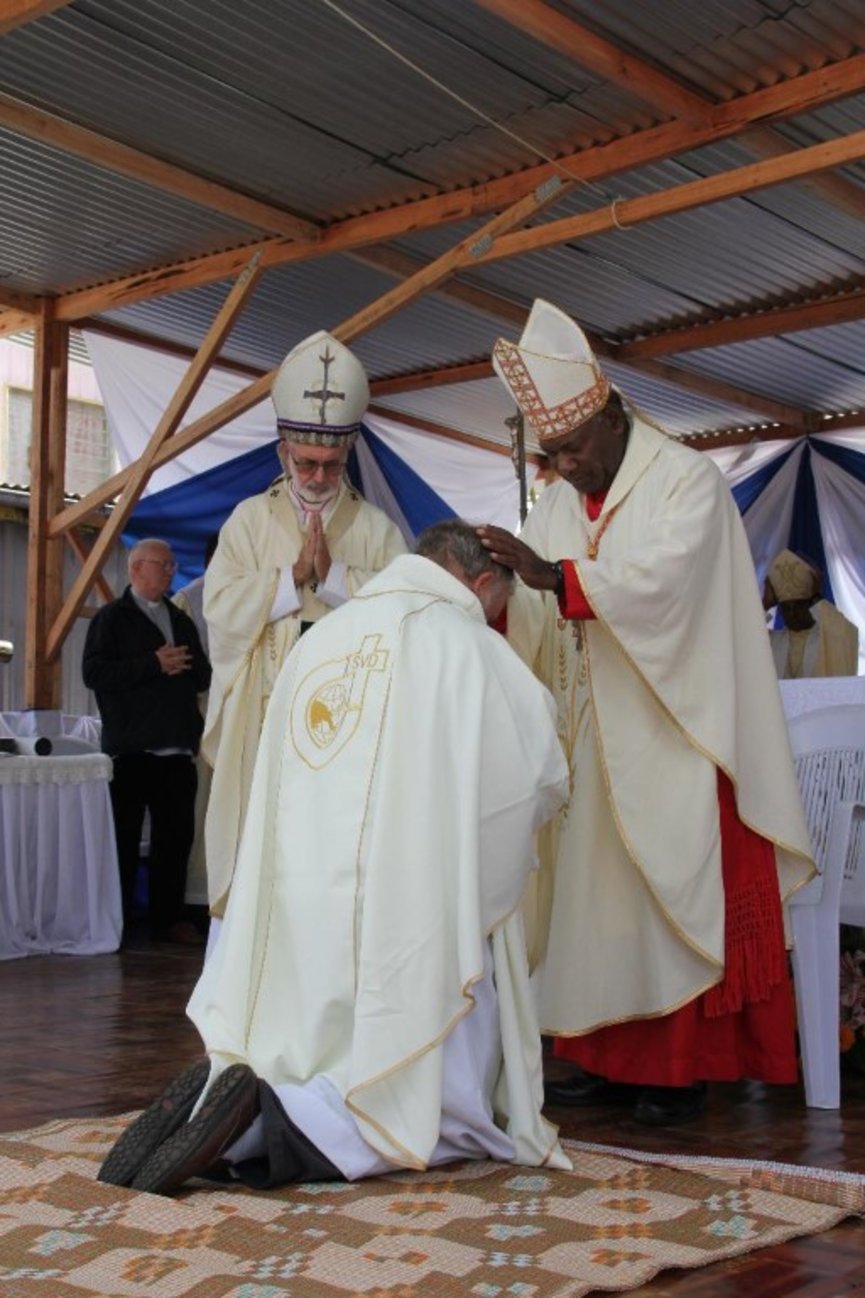 Saturday morning, the 7th of May, brought many people to Kefamo on the outskirts of Goroka town to witness the Episcopal Consecration of Bishop-elect Valentine Gryk, SVD.

All Bishops of Papua New Guinea (PNG) arrived by road from Mt. Hagen where they just finished their annual Bishops Conference. Among them was also Archbishop Fermín Emilio Sosa Rodríguez, the Apostolic Nuncio to PNG. Especially for this celebration came Fr. Jan Jacek Stefanow, the General Secretary of the Catholic Biblical Federation, who is based in Rome and Brother Peter Szewczuk, the Superior Delegate of the Polish Province of the SVD arrived from Poland.

Cardinal Ribat presided the Eucharistic celebration. The language used in the liturgy was Melanesian Pidgin. After the readings and the Gospel, the Master of Ceremony announced that the Ritual of Consecration of Bishop-elect Valentine began. The hymn to the Holy Spirit was sung. Then Fr. Jose Orathinkal, SVD Provincial Superior, Fr Paul Liwun, the Diocesan Administrator and the MSC Provincial, Chairman of the Major Religious Superiors of PNG, led Fr. Valentine up the steps to Cardinal Ribat. Next, Fr. Paul Liwun asked the Cardinal to consecrate Fr. Valentine Gryk as Bishop of Goroka. The Cardinal requested the Administrator to read the Holy Father’s letter of appointment of Fr. Valentine Gryk as Bishop of Goroka. The Latin text of the Pope’s letter was translated into Pidgin and the Administrator read it for all to hear. Afterwards he showed the original papal letter to Cardinal Ribat and to all people.

Then Archbishop Douglas Young, SVD, Archbishop of Mt. Hagen gave a homily. He spoke about faith and explained how the faith of the apostles is passed on from generation to generation. He said that on the eve of today’s celebration, he and Cardinal Ribat met with Father Valentine in the Chapel of the Kefamo Conference Centre to question him about his faith. His answers assured them that it is the same faith of the Catholic Church handed down to us through the generations. Bishop Douglas also acknowledged all the Bishops who have served in the Diocese of Goroka since its founding and said that Father Valentine’s faith is the same faith believed and preached by his predecessors.

After the homily, Cardinal Ribat, asked Father Valentine about his faith and his willingness to teach that faith and serve the faithful as their Bishop. To all the Cardinal’s questions Father Valentine answered: “Yes, I am ready to do this.” Then Father Valentine prostrated himself before the altar and the congregation sang the Litany of All Saints.

Now Father Valentine knelt before the Cardinal Ribat and the Cardinal silently placed his hands on his head. All the Bishops present followed the same gesture. The Consecration prayer during which the Cardinal held both hands over the head of the new Bishop followed. At the same time two priests held an open Book of the Gospels above the head of the new Bishop. At the conclusion of the prayer of Consecration, the insignia of the new Bishop were brought before the altar in procession: Sister Paullydia, SSpS, carried the ring, Father Andrzej Fałat, SVD carried the mitre, and Brother Raphael Goimba, SVD carried the Bishop’s staff. That procession was led by the sinsing group from Kamaliki Parish.

Cardinal Ribat anointed the head of the new Bishop with the oil of chrism. He also handed him the Book of the Gospels with the command to preach the teachings of Christ contained in it. He then placed a bishop’s ring on the ring finger of Bishop Valentine’s right hand saying: “Accept the ring, a sign of fidelity, and keep the faith intact. Guard from contamination God’s Bride of God, that is, the Holy Church.” Then he put a mitre on his head saying: “accept the mitre and let the splendour of holiness shine in you, and when the Supreme Shepherd appears, may He give you as a reward an unfading wreath of glory.” In turn, handing him the pastoral, the Cardinal said: “Accept the shepherd’s staff, the sign of the Office of Pastoral Ministry, and watch over all the sheepfold over which the Holy Spirit has established you as Bishop to guide the Church of God.” After handing over the insignia, the Cardinal asked the new Bishop Valentine to sit on the episcopal throne and he sat at the chair to his right. All the Bishops present gave the new Bishop the kiss of peace. Then the priests, brothers and nuns working in the Diocese of Goroka came forward to show respect and obedience to their new Bishop.

From that moment until the end of the ceremony, a smile could be seen on Bishop Valentine’s face expressing joy but also disbelief. This smile seemed to say: “Am I really the Bishop of Goroka?”

Bishop Valentine then continued the Mass as the main celebrant. In a solemn, dancing procession, the people from the parishes of Par from the Enga Province, where Father Valentine worked just before his appointment as Bishop of Goroka, brought gifts; the produce of their land: cabbage, carrots and broccoli, etc.

After communion, Bishop Valentine, accompanied by Cardinal Ribat and Archbishop Douglas Young, walked among the people and blessed them. The people were happy to see their new Bishop at close range. 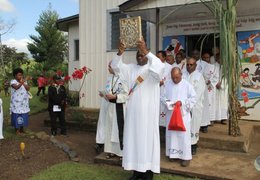 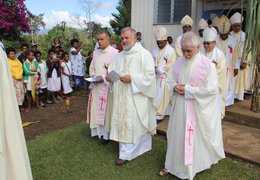 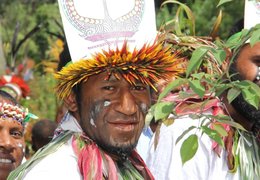 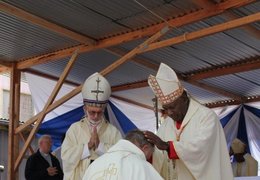 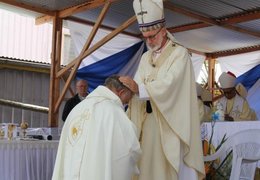 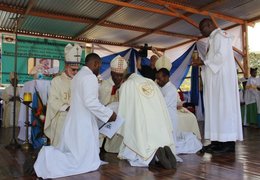 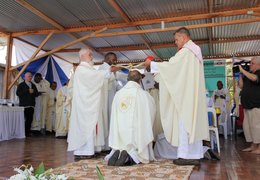 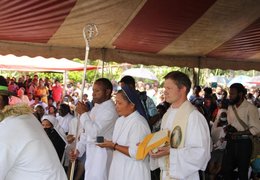 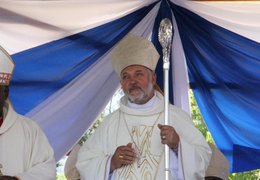 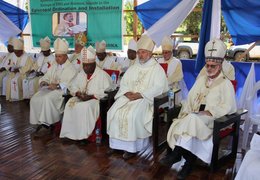 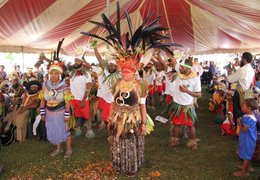 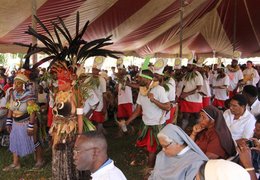 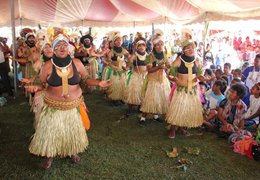 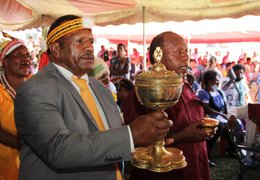 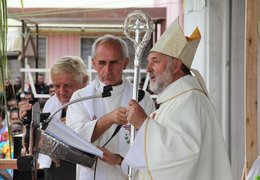 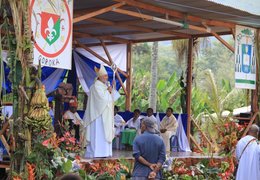 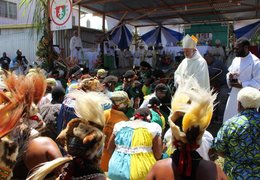 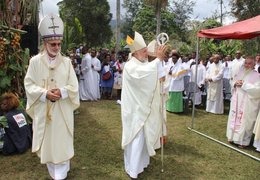 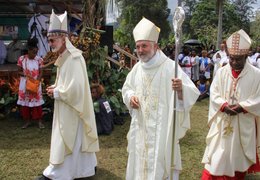 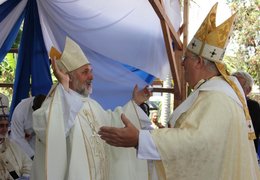 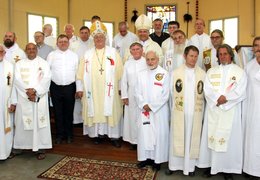