Stucture of the CBF

The Federation came into existence on April 16, 1969 to implement the Second Vatican Council’s Constitution on Divine Revelation “Dei Verbum” (DV), and this on the initiative of Cardinals Augustin Bea and Johannes Willebrands and Rev. Fr. Walter M. Abbott, S.J. with the encouragement of Pope Paul VI. It was established by the Holy See as an international public association of the faithful through the Pontifical Council for Promoting Christian Unity. As such it is ipso iure a juridical person in the Church (cf. cann. 313 CIC and 573 CCEO) and is governed by the canons of the Codes of Canon Law on public associations (cf. cann. 298-320 CIC and 573-583 CCEO) and by the relevant canons of the Codes concerning church property (cf. cann. 1254-1310 CIC and 1007-1054 CCEO), as well as by its own statutes.

The Federation is a non-profit organization, incorporated in Germany. The Federation pursues altruistic, exclusively and directly non-profit, charitable or church purposes, according to the terms of chapter “Tax-privileged purposes” of the “German Tax Code”. Any profits made may only be used for purposes as laid down in the Constitution.

The registered office of the Federation and its organizational structure, the General Secretariat, are situated in Sankt Ottilien, Bavaria, Germany. 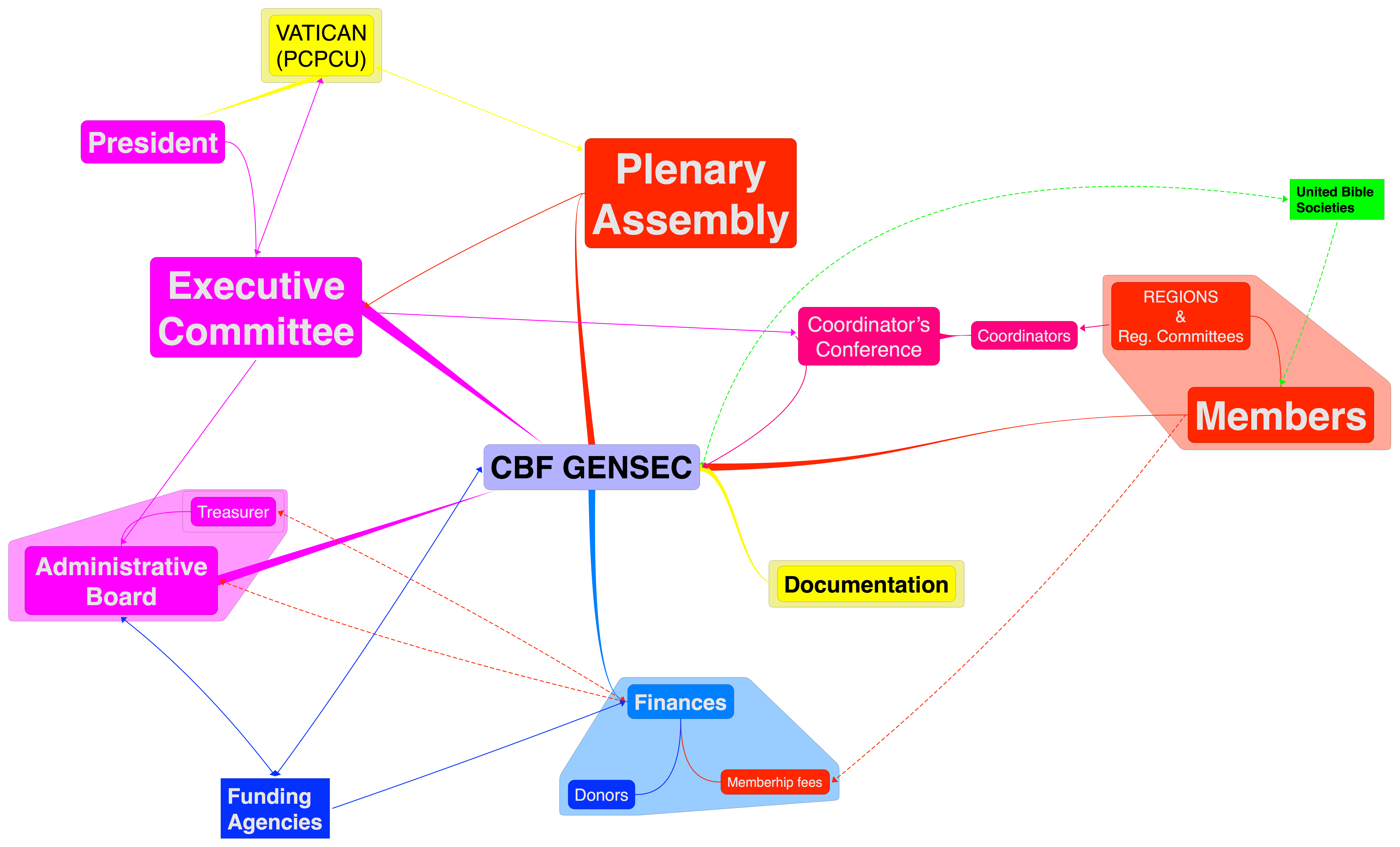 The President is the presiding officer of the Federation. He is a prelate, elected by the Executive Committee, his name being presented to the Holy See for confirmation. His term of office is six years renewable.

The General Secretary is elected by the Executive Committee and is responsible for the implementation and realization of the goals and tasks of the Federation. With the support of an international team in the General Secretariat and in collaboration with the coordinators of the individual regions he promotes
and coordinates the work of the Federation.

Based on the principle of subsidiarity the Catholic Biblical Federation is divided into seven regions: Africa, Latin America, North America, Asia, Oceania, Europe and Middle East. Some of these regions are further subdivided into subregions.

The regional and subregional coordinators have the task of promoting biblical pastoral ministry in their own regions and of coordinating it with the support of the General Secretariat. All the coordinators work on a voluntary basis.

Given the fact that there are individual catholic Bible scholars engaged in biblical pastoral ministry and interested in a closer link to the Catholic Biblical Federation, it is being created, under the auspices of the CBF and inspired by Verbum Domini (VD 45; 47) of Pope Benedict XVI, the Biblical-Pastoral Association "Verbum Domini", which will be officially inaugurated during the Biblical Pastoral Congress organized in Rome on the occasion of the 50th Anniversary of the FEBIC Foundation in April 23-26, 2019.

Friends of the CBF

Is a not for profit and a voluntary organization.

The purpose is exclusively to support and promote and coordinate the work of translating, producing and disseminating Bibles among Catholic laity for devotional purposes and the projects of the Catholic Biblical Federation.