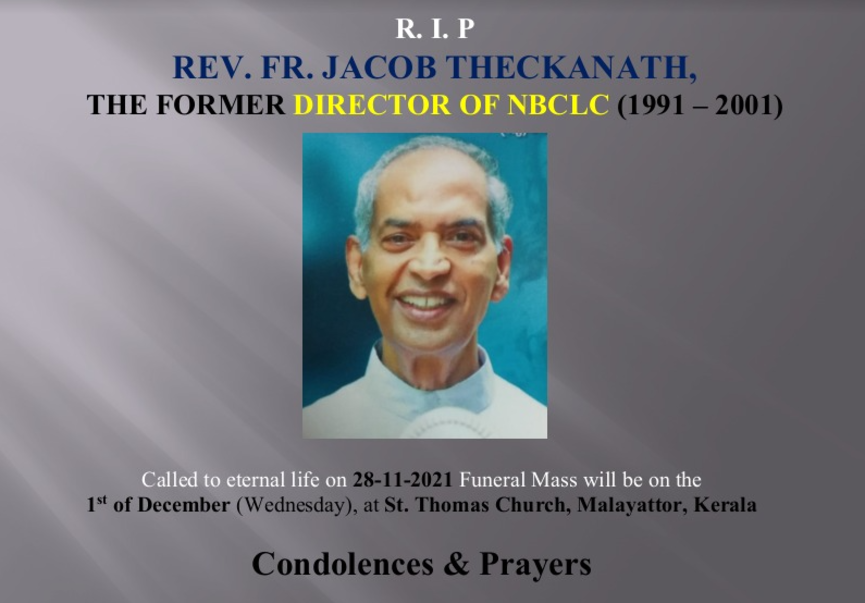 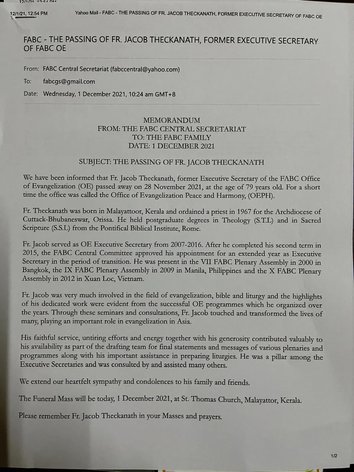 FROM: THE FABC CENTRAL SECRETARIAT

TO: THE FABC FAMILY

Fr. Theckanath was born in Malayattoor, Kerala and ordained a priest in 1967 for the Archdiocese of Cuttack-Bhubaneswar, Orissa. He held postgraduate degrees in Theology (S.T.L) and in Sacred Scripture (S.S.L) from the Pontifical Biblical Institute, Rome.

Fr. Jacob was very much involved in the field of evangelization, bible and liturgy and the highlights of his dedicated work were evident from the successful OE programmes which he organized over the years. Through these seminars and consultations, Fr. Jacob touched and transformed the lives of many, playing an important role in evangelization in Asia.

His faithful service, untiring efforts and energy together with his generosity contributed valuably to his availability as part of the drafting team for final statements and messages of various plenaries and programmes along with his important assistance in preparing liturgies. He was a pillar among the Executive Secretaries and was consulted by and assisted many others.

We extend our heartfelt sympathy and condolences to his family and friends.

The Funeral Mass will be today, 1 December 2021, at St. Thomas Church, Malayattor, Kerala.

Please remember Fr. Jacob Theckanath in your Masses and prayers.