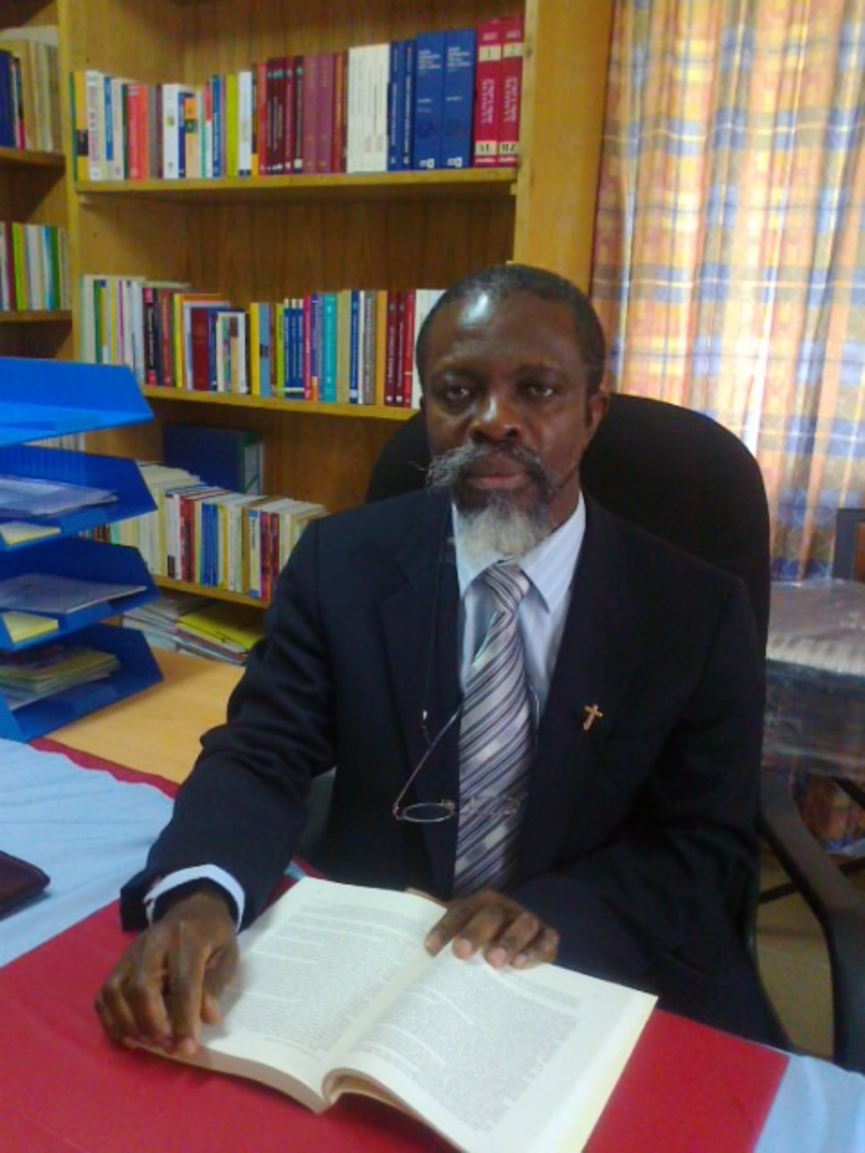 Born in Ngi (DRC) on 06 November 1958; he was ordained a priest of Kenge Diocese at Our Lady of Peace parish/Kenge on 06 October 1985. After his secondary education at St. Charles Lwanga Minor Seminary / Kalonda (1971-1977), he did his studies in Philosophy at the Major Seminary of Mayidi (1977-1980) and Theology at St. John XXIII Major Seminary/ Kinshasa (1981-1984). He obtained a Licentiate Degree in Biblical Sciences from the Biblicum of Rome in 1991 and Doctorate at the University of Munich (Germany) in 2002.

He also taught at St. Cyprian Interdiocesan Major Seminary of Kikwit/DRC (1991-1994; 2003-2017). He also taught the following subjects at the Pedagogical Higher Institute of Kikwit (2006-2009) : comparative Latin – Greek Grammar, Greek authors and Advanced History of Latin and Greek literatures. He held the UNESCO Chair/Kikwit (2006-2009) where he taught a module on « Human Rights, Religions, Violence and Globalisation ». He has also been teaching at Hekima College which is a Constituent College of CUEA since 2013 to date.

Fr. Albert Ngengi Mundele served as Academic Secretary at the St. Cyprian Interdiocesan Major Seminary of Kikwit in DRC (2005-2009). At CUEA/Nairobi, he has exercised the following functions: Chairman of the Doctoral Committee (2011-2015) and Coordinator of Graduate Training in the Directorate of Research, Innovation and Graduate Training (2016-2017).

He is a member of a team of the translation of the Missal in Kikongo language called «Fukimina Mfumu »/Diocese of Kenge (1981-1985) ; he served as Deputy Director of the Editorial Board of Le Palmier/Kikwit Editions of the ASSEDIBAND = Assembly of the Bishops of Bandundu (2006-2009). He has been a member of the Editorial Board of RIBA (Review for the Interpretation of the Bible in Africa) since 2014 to date.

Languages. He is polyglot: fluent in French, English, Italian and German; good in Portuguese and Spanish. African languages: very good in Kikongo and Lingala and relatively good in Kiswahili. Academic languages: Biblical Greek and Hebrew, Latin and Hittite.

Administrative experiences. Fr. Albert Ngengi Mundele has exercised the following functions: Prefect of Discipline at the St. Charles Lwanga Minor Seminary of Katende (1980-1981; 1986-1987); Prefect and Head-Teacher of Lycée Thuma for girls (1984-1986); Secretary/Chancellor of the Diocese of Kenge (1991-1994); Rector of St. Cyprian Interdiocesan Major Seminary of Kikwit (1994-1998).

Pastoral experience (in Congo and Kenya). Biblical apostolate among members of Catholic and spiritual movements (Legion of Mary, Bilenge ya mwinda in DRC, etc.) and apostolates in parishes. Rev. Fr. Mundele is also Preacher-Master of retreats and spiritual recollections: in houses of formation to priestly and religious life (Major Seminaries and Novitiates); in priestly and religious communities, in pastoral and spiritual centres (Kipalu, js – Kikwit/Congo ; Centre of Ifwanzondo, omi – Idiofa/Congo). He was Parish vicar at Nordenham/Diocese of Munster/Germany (2003-2004).

Scientific Associations. Fr. A.N. Mundele is a member of: the Pan-African Association of Catholic Exegetes (PACE), the Association of African Theologians (AAT) and the Institute for Biblical Scholarship in Africa (IBSA)/Nairobi.

Publications, fields of interest for scientific and research works. He is author of several books and articles in French, English as well as in German. He actively participates in several international and national conferences, workshops and seminars (full list of publications on his blog).