Feed the Hunger of the Human Heart for God through his Word: Cardinal Tagle to CBF Executive Committee and Coordinators.

Cardinal Luis Tagle of the Philippines, President of the Catholic Biblical Federation (CBF) has called on the Executive Committee and the Regional Coordinators from across the 5 continents of the only worldwide institution of the Roman Catholic Church dedicated primarily to Biblical Pastoral Ministry to help awake and “respond to the great hunger of people around the world for the Word of God in their lives” in a spirit of generous “sharing of gifts from the Lord”.

Cardinal Tagle, who is also the President of the Catholic Church’s principal humanitarian assistance Agency Caritas Internationalis, told the delegates that a recent meeting of the Caritas Executive was conducted in similar “family spirit” of sharing. He recalled a moving autobiography of a missionary in China who agonised over his inability to communicate the Word of God in Chinese, but was consoled by the image of the woman in the Gospel with the power faith that “if she could only touch the hem of the garment of Jesus” (Mt 9:21) and he urged the representatives that they can witness in practice and example to the Word of God made flesh in Jesus even when they are silent.

He noted that the great majority of the world Catholic Bishops’ Conferences are members of the CBF (101 out of 112 Conferences along with 233 associate members) and that he is inviting and encouraging those Conferences which do not already have Biblical ministry as a central dimension of their Commission activities to do so.

In response, Archbishop Jacinto Bergman of Pelotas, Brazil and representative of Bishops Conferences Latin America and the Caribbean on the CBF executive noted that the National Conference of Bishops of Brazil has made the Biblical Animation of all Pastoral Life (ABP) a priority in its Conference Declarations, but that in Brazil and other places around the world the individual Bishops and dioceses need to be encouraged to make the Encounter with Christ, the Word of God, central to all pastoral Life and Activity through ABP.

The delegate from the Middle East region Fr. Ayoub Chadwan underlined the continued Biblical Pastoral Activity in the Region, despite tremendous challenges, conflict and persecution in war-torn countries like Syria and Iraq, noted the support and solidarity of the CBF, and offered the support of the members in Lebanon to help cover the contributions to CBF from countries in conflict.

CBF General Secretary Fr. Jan Stefanow svd referred to proposals for the Celebration of the 50th Anniversary of CBF in 2019 including a Biblical Congress in Rome, and for an International Year of the Bible (2019-2020). It was also proposed that the International Church consider the possibility of designating an Annual Day of the Bible.

He also referred to discussion in the just concluded meeting of Regional Coordinators (7-8 November) in which it was noted that local and external financial support for CBF initiatives in the regions is encouraging but that funding for the central administration of CBF is a challenge. Renewed efforts will be made in all regions to improve the payment of annual membership fees to CBF and regional coordinators from the South which currently retains membership fees to cover regional activities will consult to their member organizations the proposal to forward 10% of yearly regional membership fees to the CBF Secretariat to help cover its programmes.

Regions will also make proposals for representatives to a Joint CBF-United Bible Societies (UBS) Commission to address general areas of ecumenical promotion of the Word of God.

Regional Coordinators also agreed to extend the offer for Bible Formation opportunities such as the Dei Verbum courses, free On-line formation interactive courses in French being offered by the Canadian subregion, and an ABP course being offered for the first time in English in the Caribbean.

Everyone agreed that the physical presence meeting was a valuable expression of communal sharing in the Word of God as a point of impulse for committed follow up in sharing of information and initiatives across the CBF through on-going electronic communication and prompt response to such communication in the example set by the General Secretary and thanked the Secretariat team for its efficient and dedicated organization of the Meeting. The meeting of the Executive Committee continued 10-11 November. 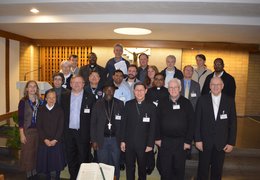 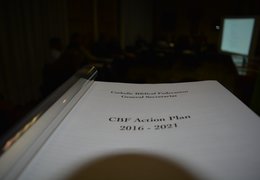 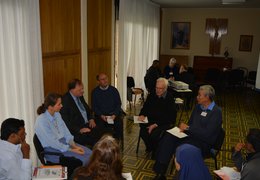 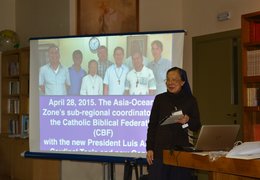 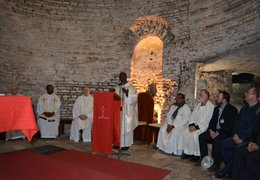 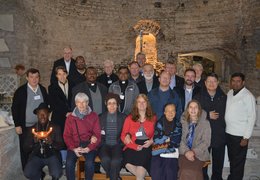 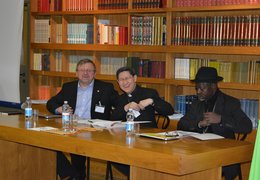