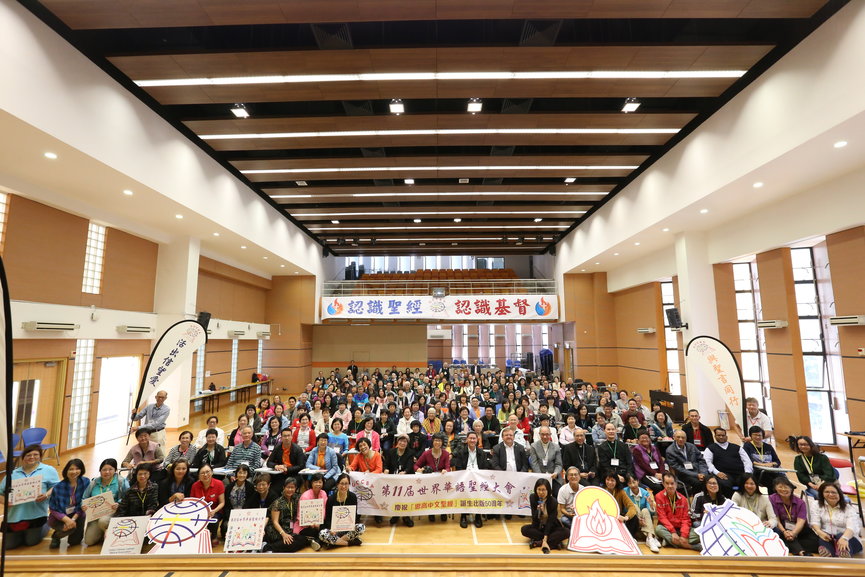 Following a meaningful celebration of the 50th birth anniversary of the first Chinese Catholic Bible (Studium Biblicum version, 1968-2018), over 200 participants gathered at the Eleventh World Chinese Biblical Congress held in late November in Hong Kong commit to continue promotion of reading and living God’s Word to bring forth fruit in all ministries of the Church.

The declared commitment, resulted in an international gathering organized by the United Chinese Catholic Biblical Association (UCCBA) with the accompanying passage of the Sower and the Seed Parable (Mt 13), aims to contextually respond to papal exhortations Verbum Domini,Evangelii Gaudium and Gaudete et Exsultate, making the Word of God evermore the heart and animating force of the Church’s life and mission.

Reflecting on the theme of “Journey with the Word to Live Out Faith, Hope and Love”, the UCCBA event, which took place from 22 to 26 November, assembled Chinese communities and collaborators in the biblical pastoral ministry from 35 territories coveringHong Kong, China, Macau, Taiwan, Singapore, Malaysia, Brunei, Indonesia, Myanmar, Philippines, Australia, New Zealand, Germany, England and Canada. Lay people formed the majority with more than 130 participants.

The supporting text of the event – “Man shall not live on bread alone, but on every word that comes from the mouth of God” (Mt 4:4) – was chosen to lead all to setting their goals to respond to God’s call. The UCCBA gathering started with a solemn opening mass presided by Bishop Michael Yeung, at the Cathedral of the Immaculate Conception on 22 November, who gave a homily to inspire all to reflect on seed sowing to produce yield.

On the following day, a keynote address was delivered by Auxiliary Bishop Joseph Ha OFM of Hong Kong in connection with the commemoration of 25th publication anniversary of the pontifical document “Interpretation of the Bible in the Church”. Relating to pastoral ministry, highlights were made on approaches to know the Bible, lectio divina, community formation and service to people.

With his input on “The Bible Inspires All Pastoral Work”, Catholic Biblical Federation (CBF) President Cardinal Luis Antonio Tagle of the Philippines made references to Verbum Domini (VD)and Verititas Gaudium (VG). Biblical apostolate should make the Word of God the animating force of all services in the Church (VD 73). To achieve this, it is necessary to have full communication and collaboration between pastors, lay pastoral workers, catechists, educators, basic communities, exegetes and other related parties. The ever fresh and attractive good news of the Gospel of Jesus Christ continues to take flesh in the life of the Church and of humanity (VG 4a). The Word of God shapes the whole evangelization mission of the Church and its many expressions.

Referring to Hong Kong, being the birthplace of both the Studium Biblicum Bible and the UCCBA, where the congress was held, the Association’s President Father Joseph Fung said, “We are conscious to keep creating and nourishing ‘an efficacious and constant love’ of sacred Scripture, source of the interior life and of apostolic fruitfulness, among Chinese faith communities worldwide through networking, collaboration and sharing of experience and insights for greater biblical apostolate.”

Convinced of a direct link between holiness and the Word of God, three notable figures that had a special relation with the Church in Hong Kong were honoured as patrons of the UCCBA Congress. Namely, they were Saint Paul VI, the only Pope who paid a pastoral visit to Hong Kong in 1970 after his promulgation of Dei Verbum in 1965; Saint Joseph Freinademetz of the Society of the Divine Word who did evangelization work in Yim Tin Tsai Village in Sai Kung from 1879 to 1881 before heading to South Shantung of China to fulfil his lifetime mission; and Blessed Franciscan Friar Gabriele Maria Allegra who founded the Studium Biblicum Franciscanum in 1945 in Beijing and spearheaded the translation and publication of the first complete Chinese Catholic Bible in Christmas 1968.

The pectoral cross of Saint Paul VI and the relics of Saint Freinademetz and Blessed Allegra were displayed beside the enthroned Bible in the meeting hall as unique symbols of their prayerful company.

UCCBA Secretary, Cecilia Chui, expressed that “every saint is like a ray of light streaming forth from the word of God” (VD 48). The Association invited the winner of the Second International Chinese Hymn Composition Contest in 2017, organised by Radio Veritas Asia Mandarin Service, Samson Chiew of Malaysia, to create a theme song for the Eleventh UCCBA Congress “The Light of Life” based on the Bible. The key message of song lyrics is “In Jesus was life, and that life was the light of all mankind. The light shines in the darkness, and the darkness has not overcome it.” (Jn 1:4-5)

Divine Word Missionary Father Tarsisius Sigho of Taiwan walked through Pope Francis’ exhortationGaudete et Exsultate(GE), released in April 2018, with the topic of “God’s Word: Key to Holiness”. Nothing is more enlightening than turning to Jesus’ words and seeing his way of teaching the truth. Jesus explained with great simplicity what it means to be holy when he gave us the Beatitudes (cf. Mt 5:3-12; Lk 6:20-23). We have to do, each in our own way, what Jesus told us in the Sermon on the Mount. (GE 63)

The immense horizons of the Church’s mission and the complexity of today’s situation call for new ways of effectively communicating the word of God (VD 97). Companions of the Cross Father Francis Ching of Canada shared his experiential insights on “New Evangelization in the Light of the Word” with living examples and references to chapter five of Evangelli Gaudium on spirit-filled evangelizers. Emphases were made on the personal encounter with the saving love of Jesus, the company and support of small ecclesial communities, and Christian witness of joy and peace in life situations to share good news.

Mary, “Mother of the Word” was taken as the guiding star of the five-day journey of the congress. Father John Mi, spiritual director of the Little Rock Scripture Study Program in China, delivered a talk on “Mary and Biblical Spirituality” to encourage ongoing reflection on making God’s Word the way of life in living the virtues of faith, hope and love.

Biblical passages that highlight the words and deeds of the Mother of God were selected for lectio divina each day to deepen understanding and inspire actualization of the congress theme.

With the objective to offer rich experiences of how the Word is lived and promoted in different contexts, the congress staged a Biblical Exchange Forum to showcase the many faces of biblical pastoral ministry with witness sharing. The topics embraced the connection of the Word of God with the Saints and the Interpretation of Scripture including a brief presentation of the Catholic Musical on Saint Joseph Freinademetz (VD 48-49), Catechesis and Lectio Divina (VD 74, 86-87), the Lay Faithful (VD 84), Marriage and the Family (VD 85), the Young People (VD 104), the Suffering (VD 106), and Social Communication with Artistic Expressions (VD 112, 113),.

To facilitate mutual learning and ongoing collaboration going forward, the congress included sessions for presentation of reports by biblical associations and Chinese communities of the participating places. Participants also experienced fellowship inthe Word in the Diocese of Hong Kong through visits in groups to five selected parishes.

Father Peter Lo, diocesan director of the Hong Kong Catholic Biblical Association (HKCBA) that is a founding member of the UCCBA, shared the joy of co-organization of the congress as a meaningful celebration of HKCBA’s 45th anniversary of foundation. Thought-provoking perspectives of fulfilling ministries centred on the Word of God in different settings are beneficial for future planning.

The significance of the celebration of the 50th anniversary of publication of the Studium Biblicum Bible marked a new page of making the Word of God alive creatively for fruit-bearing mission to be initiated and accomplished by the attending Chinese communities of the congress and collaborators of the UCCBA.

Each participant received a Bible seed, crafted with the message of “diligent reading of the bible and living the divine word” in relation to the Parable of the Sower, together with a leaflet indicating simple steps of planting, at the opening of the congress during the Bible enthronement ceremony on 23 November.

Concluding the journey with the Word and with each other in Hong Kong at the closing mass celebrated by Bishop Joseph Ha on 26 November, all participants received a copy of the Chinese version of God’s Word Daily 2019 (by courtesy of Claretian Publications) and “Companion of the Word” written by Salesian Sister Maria Ko and published by the HKCBA. This is to allow the Word of God to shed light on our concerns, cultures, dreams and contexts.

Through the intercession of Saint Paul VI, Saint Freinademetz and Blessed Allegra, the commissioning ceremony of more than 200 participants signified the wish that their own lives may be that “good soil” in which the divine sower plants the word, so that it may bear bountiful fruits in the biblical apostolate, “thirtyfold, sixtyfold, a hundredfold” (Mk 4:20).

Having been witnessing the growth of UCCBAsince its first meeting held in 1987, the Association’s Secretary Cecilia Chui expressed deep gratitude to bishops, biblical partners,consecrated persons and spiritual supportersaround the globe who prayed for the EleventhUCCBA Congress, including Monsignor Ante Jozic, representative of the Holy See in Hong Kong, and Mrs Carrie Lam, Chief Executive of Hong Kong.

The UCCBA was founded in 1990 when its second meeting was held in Hong Kong. Participants from Singapore, Malaysia, Hong Kong, Taiwan, Australia and the USA adopted the resolution to found a united Chinese biblical association. Affiliated with the CBF, the Association currently takes Chapter VI of Dei Verbum, Evangelii Gaudium andGaudete et Exsultate as the roadmap for implementation of biblical pastoral ministry.

Following 28years of growing and maturing with the living Word, the UCCBA will continue to broaden networking with Chinese communities in different places and collaboration in biblical activities, alongside making use of electronic means to promote fruitful reading and sharing the Word of God.

The Association and Radio Veritas Asia Mandarin Service will join hands to organize the Third International Chinese Hymn Composition Contest. The next UCCBAcongress will take place in Kaohsiung,Taiwan at a time to be decided. 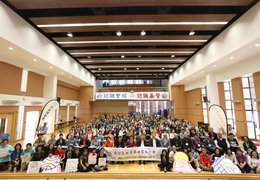 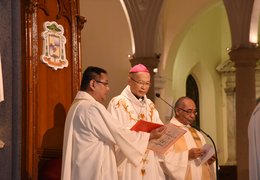 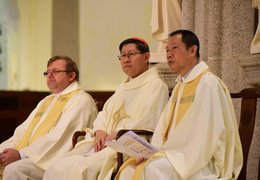 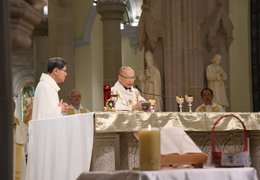 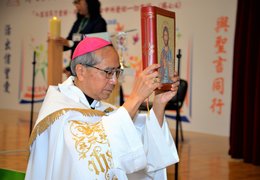 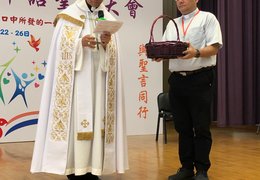 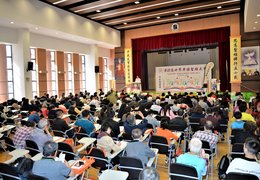 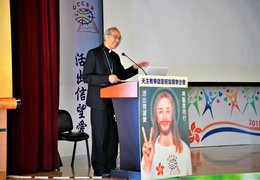 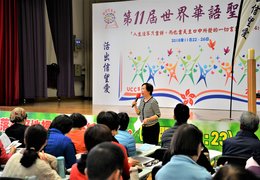 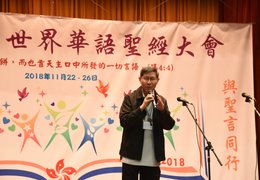 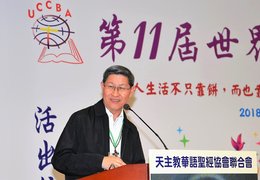 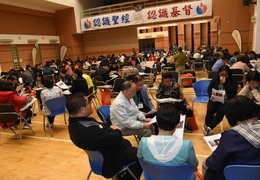 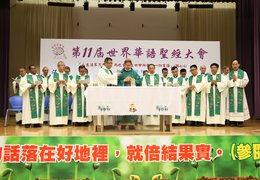 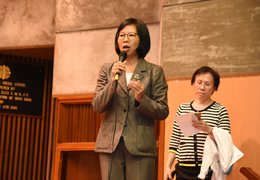 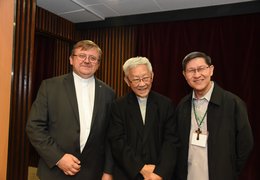 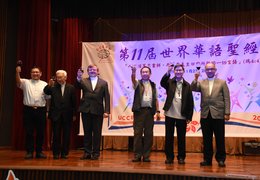 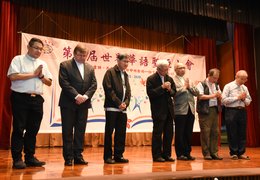 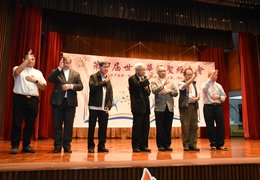 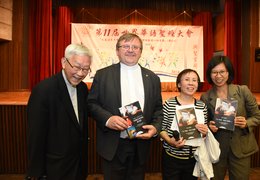 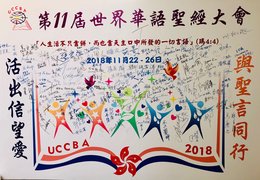