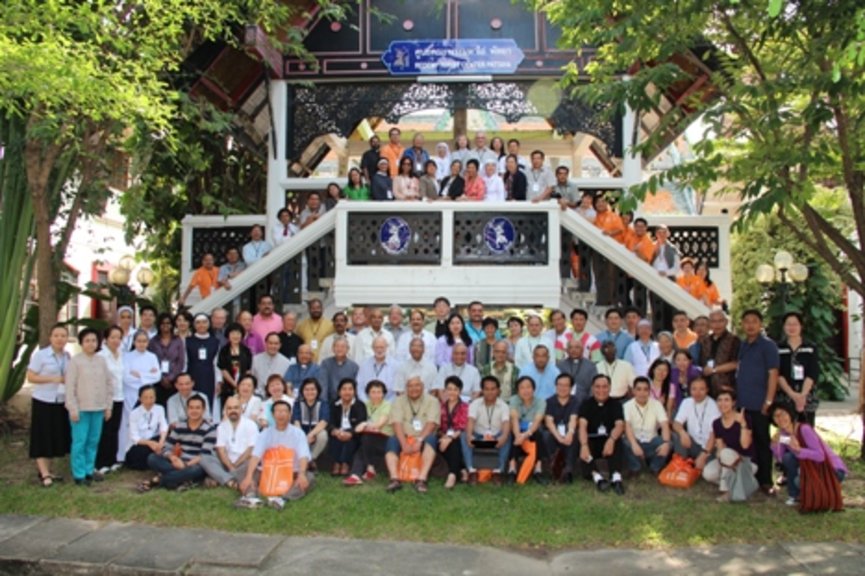 The seminar was attended by participants from different parts of Asia.  There were Bishops, Priests, Sisters, Brothers, Lay People involved in the Biblical Apostolate.  The lay people comprised half of the participants.  The invitation was given out by the Executive Secretary of FABC-OE, Fr. Jacob Theckanath.  He was amazed by the overwhelming response to participate in this seminar that he had to change the venue from the Camillian Retreat House in Bangkok to a bigger one at the Redemptorist Center in Pattaya City.

The topics were very attractive, enriching and interesting for further discussions and sharing.  They were the following:

1. “I have an Obligation to All Peoples”  by Archbishop Thomas Menamparampil, SDB,  Chairman, FABC-OE.  Archbishop Emeritus Thomas shared with the participants his acceptance speech when he was conferred an honorary doctoral degree on Missiology by the Urbaniana University in Rome, Italy on November 14, 2013.  Here he shared his missionary experiences, the values guiding his work, and his work plan to reach out as much as he can – indeed to “all peoples” as St. Paul did in his time.

“Crossing the borders” as a missionary to diverse cultures and peoples not so much to teach his own concepts but to lead them to understand these by using the people’s own specific cultural vision of things.

He introduced “the Mission of Anger-Reduction since some obstacles to missionary effort would be prejudices, memories of historic injuries and perceived vested interests.  It is part of evangelical work to heal the memories of historic wounds at the ethnic, cultural, national and even civilizational levels” – he said.

He also said that “As long as the more challenging dimensions of the Gospel are seen as arbitrary clerical impositions, they become hard of acceptance.  But if they can be presented as evangelical demands essential for personal and community growth, acceptance becomes easier.”

2. “Biblical Formation of the Laity for New Evangelization” by Archbishop John Ha of the Archdiocese of Kuching, Sarawak,  Malaysia.

He shared the four-week lived-in Youth Formation (K.A.Y.A.) which stands for Kuching Archdiocesan Youth Apostolate.  They have been running this program every year for the past 21 years and it is getting very popular.  It aims at forming participants into Christ’s disciples and evangelists through self-knowledge and knowledge of Christ.

They have also a Bible Course for the Laity.  It is a 3-year course run on a two-hour class per week for 3 years and leading to a Diploma.  The course has 3 levels: basic, intermediate and advance.

Another study program is “The Great Adventure Bible Study Programme” designed by Jeff Cavins and his team. It starts off with a “Foundation Series” and continues with studies of the Old Testament as well as the New Testament.  The lecture does simple text analysis, with cross-references to other relevant biblical texts and references also to the Catechism of the Catholic Church as well as Church practices especially the Liturgy.

From these three experiences of biblical pastoral ministry that he has in the Archdiocese of Kuching, it has become increasingly clear that biblical formation of the laity must balance academic knowledge with spiritual application to make the Scripture come alive as the Word of God for life.

The Little Rock Scripture Study began in the seventies of the last century that was developed by the laity of the Diocese of Little Rock in Arkansas, in the United States.  The program consists of 40 modules, drawn from the whole Bible.  Learners are encouraged to take “repeated reading” and do “exercises” of related passages so that the Word is instilled into the learners’ heart and life and change their lives.

In 2008, the Little Rock Scripture Study program was first introduced into Mainland China by Anthony Ng and his team, all belong to a Malaysian Chinese Catholic Group Mustard Seed Evangelization Center.  They started in Guanzhou and Xi’an.  The shortage of Chinese materials and lack of follow-ups, the program was launched without success.

In August 2010, with the assistance of Fr. John Mi Shen of Zhaoxian diocese (Hebei province),  the Mustard Seed Center has brought LRSS program back to China again and received positive responses.  Several graduates of Yiwu community volunteered to promote the LRSS program elsewhere in Mainland China.

Since this way of Bible-reading and doing exercises counts mostly on the efforts of individuals, it was found that it could be convenient way for Catholics living in urban areas.  The large group gatherings and sharing will highlight the communal dimension of the Little Rock Program, enabling a more effective way to witness the learners’ experience and interpretation of Scripture.

A member of the group of Fr. John Mi Shen shared with the participants with Fr. John as the interpreter, how Scripture and the program, has changed his life and his outlook in life that he wants to continue to be an apostle of the Word.  That was really a touching sharing that was appreciated by the participants.

For St. Paul, to ‘evangelize’ was to “bring about the accomplishment of the Gospel of Christ” (Rom 15:9) or “to make the Word of God fully known” (Col 1:25), because in the Gospel “is the power of God for salvation to everyone who has faith” (Rom 1:16)

The parental responsibility required of Paul that he nurtured his ‘children’ through personal example for imitation (1Cor 4:16).  As their ‘father’ he tried to embody Jesus in himself and give visibility to Christian life for his ‘children’ to see and to imitate.  Hence, he could make a genuine claim that he was mediating Christ and appeal to the communities.

Evangelization, therefore, is a person to person approach sharing a Christ-experience.

There is a need for a dialogue between the Buddhist way and the Christian way.  Words may be misinterpreted or misunderstood but a living witness to Christ can say everything.

6. “Evangelii Gaudium of Pope Francis:  Orientations for Biblical Apostolate” by Bishop Pablo Virgilio David of the Diocese of Pampanga, Philippines.

“Biblical Apostolate” as such does not really figure among the concerns of the Pope Francis in his post-synodal exhortation on the new evangelization, Evangelii Gaudium(The Joy of the Gospel).  The lengthy part that he devotes to the Scriptures in Chapter Three of the said document has to do, not with Scriptures as such, but with the challenge to evangelize anew, i.e., to proclaim the Word of God in the contemporary setting, especially in the pastoral task of preaching.  In that chapter, Pope Francis reaffirms what the earlier Vatican II Dei Verbum and the Post-synodal exhortation Verbum Domini already did—namely, the call for “a greater ‘biblical apostolate’, not alongside other forms of pastoral work, but as a means of letting the Bible inspire all pastoral work”.  (DV 24, Propositio 30 Synod 2008, VD)

In the Bible you have the greatest stories ever told—the story of salvation.  Our mission is to teach people how tell the tragic and otherwise absurd stories of their lives into stories of salvation by viewing them in the light of the story of Jesus, God’s story of redemption.”   Hope is something all people look for in the midst of the great temptation to despair.  Hope is what evangelization is about, not proselytization; it is what evangelization really has to offer—a  good news!

New evangelization is about helping people reflect on human experience with the basic aspiration:  “How do I make sense of it? What is the meaning of it all?  What is God saying to me/us?  How am I/are we invited to respond?”  The Scriptures are there to help us hear God speaking to us in contemporary human experience.  They are like a hearing aid that mitigates the human deafness to God’s voice, God’s messages.

7. “Biblical Apostolate and New Evangelization 50 years after Vatican II” – Insights on Roads of the Word Ahead” by Fr. Ludger Feldkaemper, SVD of Germany.

Fr. Ludger had been very much involved in the Catholic Biblical Federation (CBF) as General Secretary for many years.  He had increased the number of members of CBF during his term, inspiring and encouraging more people and groups to be engaged in the Biblical Pastoral Ministry.  CBF was born in 1969 to assure that the directives of the Vatican Council II concerning “Sacred Scriptures in the Life of the Church” (Chapter 6 of Dei Verbum) would be put into practice.

After Dei Verbum was Pope Paul’s Ad Gentes then Evangelii Nuntiandi on Evangelization in the Modern World.  In 1993 the document on “The Interpretation of the Bible in the Church” – a commentary for all practical purposes on chapters III and VI of Dei Verbum was a special interest for those involved in the biblical pastoral ministry.  In 2008, the Synod on the Word of God in the Life and Mission of the Church, Pope Benedict fulfilled the CBF desire since its Plenary Assembly of Bangalore in 1984.  The post synodal exhortation Verbum Domini published on September 30, 2010 can be considered the handbook for the implementation of the Council’s directives on Sacred Scripture not only on the Life but also the Mission of the Church!

Now, we have the “Joy of the Gospel” which fills the hearts and lives of all who encounter Jesus. We are all “missionary disciples”!

8. “Greening the Catholic Church Today: Bringing to the Fore a Biblical Eco-Spirituality in the Era of the New Evangelization” by Prof. Lysander P. Rivera of the Philippines.

Prof. Rivera spoke about the global phenomenon of Climate Change with its effect on several calamities that affected the different parts of the Philippines and its recent strong impact with Typhoon Haiyan.

Pope John Paul II paved the way for the ecological awareness and conversion to take its rightful place in the Social Teachings of the Church.  In 1971, through the Social Encyclical Octagesima Adveniens, Pope Paul VI identified environmental issues as an urgent and wide-ranging social issue that concerns the whole human family and thereby urged all Christians to take responsibility for the future.